This past month I have been busy making Ian’s birthday party decorations.  I wanted to share a few of the items I am making.

I don’t want to spoil the surprise, so this is just a sneak peek at what I can do now that I have my Silhouette Cameo to help me.

Ian had decided he wanted a pirate birthday party this year.  I wanted his invitations to be pirate chests that open up to revel treasure, and a treasure map.

I quickly gave up trying to draw a treasure chest and just purchased a cut file from the Silhouette Studio Store.  After which I ran it through my Cuttlebug to emboss the paper with a wood grain.

I went to Photoshop and created a picture of coins and jewels that matched the shape of the card.  I imported that image into the Silhouette Studio software so that my machine would cut around all the little shapes for me.

I also created a cut out that would contain all the information on the card.

“Avast, me hearties!
Join us for a swashbucklin’ adventure
Shiver me timbers! Captain Ian is turning 4
Board ye ship ‘n follow ’tis old map
to find a buried birthday treasure!” 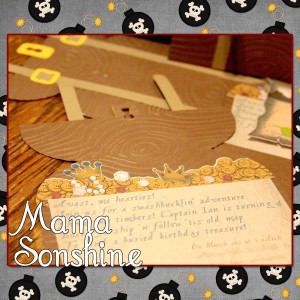 I used the digital graphics from Just So Scrappy‘s YoHo Pirate kit (as I will do for various other items I made for this party) to make cut out a treasure map.

The three elements inside the card were made with the Silhouette’s Print ‘n Cut feature, which I think is da bomb!

I cut the treasure chests out in a light brown and dark brown cardstock.  I also cut the straps in the same two colors, I then used the light straps on the dark chest and vice versa.  The buckles and locks were cut out using a gold-colored cardstock.  I glued all the elements together, except the map, which I attached with a brad so it can be moved.

Using the same digital graphics I created a pirate flag topiary  table decoration.  I had to create my own cut file for the flag portion, cutting out the skull and crossbones. 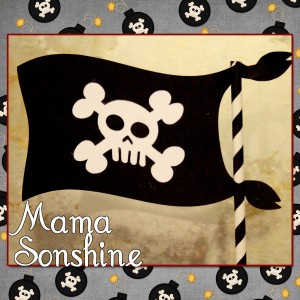 I sandwiched a white piece of cardstock in between the two flag pieces, which I glued to a paper straw.  The base is made using the print and cut feature, it is an adapted cupcake wrapper shape.

And what it just wouldn’t be a party with out party hats!

For the pin wheel I used the sketch feature that can only be found in the Silhouette Studio Designer Edition.

I ‘hand’ drew the skull and bones, and by hand I mean I used the draw polygon tool.  I used the sketch tool to make the skull look more hand-drawn.  I used a black Sharpie Marker to draw the lines with the Cameo and then made the cut around it.

This is only the tip of the iceberg when it comes to decorations that can be made using a personal cutting machine.  I would never have been able to cut out all the pieces to make forty invitations, if I had to do it by hand.

I have much more planned and will revel more after the party.

21 thoughts on “Hand Made Decorations for a Pirate Party”

Happy almost half way through April!
New kicks, who ‘dis?