So this time last week I was sitting in the ER with Baby Sid and Mom at Legacy Emmanuel Hospital.  If you live in the Portland area and need to take your child to the ER, go to this one (unless of course you don’t have time to choose, then go to your closest one!)  They have their own children’s emergency entrance, that’s right, one that is separate from adults.  The staff is great and they know how to deal with kids, and parents. 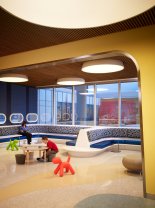 Baby Sid (3 months old) hadn’t been feeling well and earlier in the day he cried and it sounded like a barking seal.  Then he was fine, for the most part.  Keep in mind this is a very easy-going baby, not a lot of crying, he is a happy kid.  I was settling in for his last feeding of the night (because he already sleeps 8 hours! at night) when it sounded like he was having a hard time breathing.

So I called my mom….’Mom can you hear him? should I call the Dr? He is having a hard time breathing’  “YES! call the On-Call-Dr and have them listen to him breath, then call me back”

While talking to the On-Call-Dr Baby Sid started to cough and she said to take him in, it sounds like croup and at that age you don’t take chances.  Then she said “have someone ride in the car with you to monitor his breathing.”

Now our oldest is asleep, so I left my husband home with him and drove the 1.8 miles to my mom’s house and picked her up.  She drove to the hospital and I sat with Baby Sid, who was still having a hard time breathing, but smiled most of the trip.  While the Dr said to monitor his breathing she did not tell me what to do if he stops! but luckily nothing like that happened.

Fast Forward to the front desk nurse checking him out.  She says to the duty nurse whom she is passing us to “he has stridor but it’s not too awful.”  To which I reply, “well, not awful to YOU!” in slightly good humor.

His blood oxygen levels were normal but he was taking about twice as many breaths a minute as he should have been.  They cleaned out his nose with a vacuum, boy that was fun! and sent his snot to the lab.  This improved his breathing rate but he was still squeaking with each breath.

The Dr said his lungs sounded good when he listened with the stethoscope and gave him a liquid steroid to open up his bronchial tubes and reduce the inflammation.  Because his lungs sounded clear the Dr said it wasn’t croup but bronchiolitis caused from Sid’s nasal drip.

What is the difference between the two?

The main difference is where the inflammation occurs in the lungs.

The cause can also be different but certain viruses cause both; like RSV, adenovirus, and parainfluenza, to name a few.  There are other causes of each and other symptoms.  Treatment is usually the same, steroids to reduce the swelling, and anything else you can do for a cold.

With croup the inflammation is in the trachea, around the vocal cords.

Bronciolitis is swelling or mucus build up in the bronchioles.  These are the smallest airways in the lungs.

You should always consult your healthcare provider to determine the cause of your symptoms.

Coincidentally my nephew, who was in town for the holiday, went to the same ER the very next night as was diagnosed with croup…

They sent Baby Sid’s nose mucus to the lab and it came back negative for the viruses listed above.  His lungs are still clear and his breathing is just fine.  Although he is still coughing and has a runny/stuffy nose.  I think the nasal drip is causing him to throw up a lot more than normal causing him to lose about 3 ounces (since he is above the seventy-fifth percentile for weight I am not concerned).

Did he have croup like my nephew or did he have bronchiolitis?  The only way we could have really determined it would have been a chest x-ray, but that is pointless.  The treatment would have been the same, so no need to expose him to unnecessary radiation.

He did good for his first, and hopefully last, ER visit.