When I found out I was pregnant I had to start thinking about nursing.  Would I nurse, for how long, what about when I went back to work…. Everything but what if I have problems.

Breast feeding seemed so natural and easy, everybody else is doing it, why would I have any issues?

I decided I wanted to nurse for the first year, and I would pump when I went back to work.  The short story is we had issues, but that story is for another time.  We made it for 13 or 14 months.

When my second son, Sid, was born this year, I thought, this will be easy! I am a pro now, after all, I did this for over a year with Ian.

This time around Sid had no problem latching on and nursing, but I have a condition called Hyperlactation.  I didn’t know this the first time around, but I do now.

I produce too much milk, in fact with my first child I gave some of my milk to a friend who didn’t produce enough.  This causes my milk to come out too fast and with too much force.   The milk the baby is getting can also be too thin, making them full before they get the hind milk which is higher in fat content.  Baby can get too much lactose in his gut causing him to be fussy, have excess gas, spit up excessively after feeding, not stay full as long and problems with stools.

The baby can be mistakenly diagnosed with reflux or colic, as my first child was.  Due to my previous experience, I was prepared to have an overabundance of milk again.  Women who have a large number of alveoli are more likely to have hyperlactation.  I believe this can happen with women who are genetically predispositioned to have twins.  By this, I mean fraternal twins, which are genetic, not identical twins.  We do have twins in our family, in fact of the six female cousins in my generation, three of them have twins.

How did I find out I had this syndrome?  Like I said, I didn’t know about it while my first son was nursing.  Sid seemed to get really bad gas after nursing, but not when he took a bottle of breast milk.  So one night while up with a very upset Sid I started to do some research on what would cause gas while breast-feeding.

All the problems I had with Ian and was starting to have with Sid could be explained by this one syndrome.  Babycenter.com lists some things you can do to help lessen your production of milk, which I tried.  While I now have it more under control, I still produce too much milk.  Who would have thought producing too much would have been a problem?

Of course I then had a mental break down because I wasn’t producing as much milk.  Yep, call me crazy!  I still have more than Sid could eat, but I felt that I HAD to donate milk, and if I produce less than I won’t be able to do that!  I felt it was my responsibility to feed the village.

Now, I usually pump twice a day, once before bed and once when I get up.  Unless of course baby Sid gets a bottle of breast milk during the day, I then have to pump since he didn’t nurse.  I can usually pump out ten ounces in less than 10 minutes, and sometimes I don’t even drain I my breasts with that amount.  I always try to pump out everything, and in the morning I have to pump out a few ounces, dump it, and start again.  This way I am getting ride of the problematic thin milk. 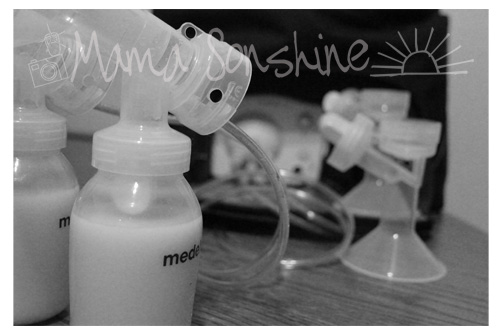 My son is only 10 weeks old and I already have a freezer full of milk.  I am not exaggerating!  I have to store it at my mom’s house in her large freezer.

Luckily there are options to help out those in need of breast milk, so all this excess milk will not go to waste.  A few options I have explored are:

and I am sure there are more.  There are also groups on Facebook where you can give you milk to moms in your area.

Take home message: Breastfeeding is tough!  Mentally and physically and just because you have done it before doesn’t mean it will be easy the next time.  But keep at it, don’t give up!  It is important for both mom and baby (at least in my opinion).